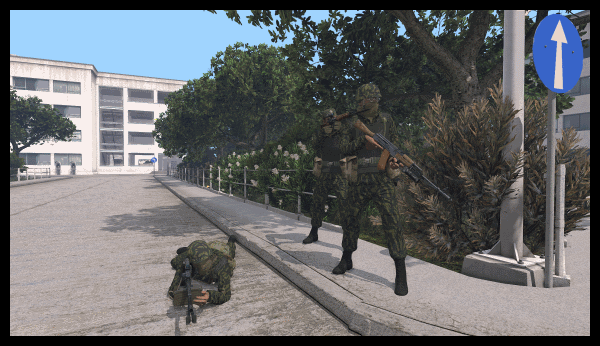 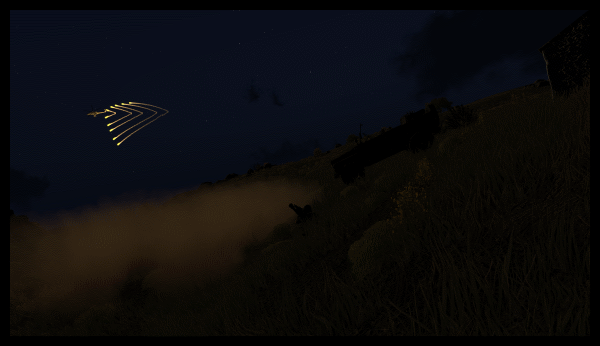 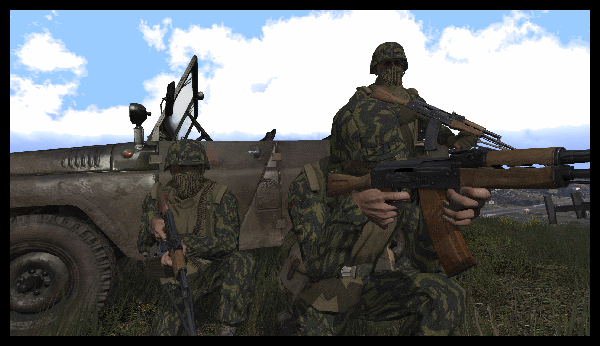 All content is either Adapted Material based upon the ArmA 2 sample models, or is released by BIS under the APL license, and is licensed under the same APL as that work is. Language mod content is released under APL-SA. The original creators of the materials is Bohemia Interactive. A list of modifications is in the readme.txt.
South Zagorian Army
Download (429 MB)
(Version 0.3.2)
ArmaHolic Link (v0.3.2) 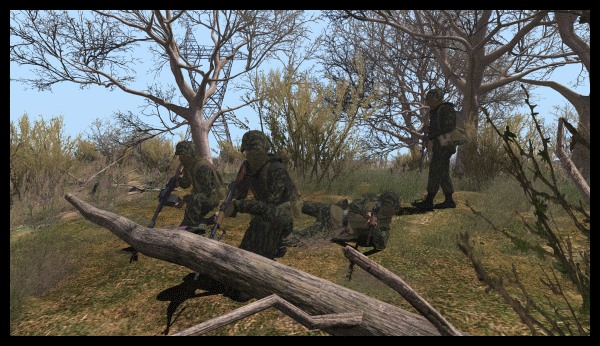 South Zagoria
Soldiers relaxing; the two in khaki vests are reminiscing about older days in their old uniforms.
This addon aims to create a fictional army based upon the South Zagorian/Chernarussian region that has been created in ArmA 2, and is based upon fictional events which occur after the fictional events which originally occured in ArmA 2. This army utilizes mainly modifications of Afghanistan-era Soviet Arms, thanks to control of a few factories in the northern part of Chernarus. This release has infantry units and a UAZ, other vehicles will come later.

A basic summary is as follows: After the ChDKZ forces were largely subdued by the combined USMC/CDF presence, a small pocket was capable of gaining strong support from Russia to take back the region of Chernarus, recieving support in the form of funds and arms, under the condition that the new army obey international laws. This new South Zagorian Army is meant to distance itself from the war crimes commited by the ChDKZ.

These units should be compatible with ALiVE, please inform me if they do not work properly.


-----
CDF and Takistani Army units are also present, using the AK-74 and AKM, respectively. They are on BluFor and OpFor, respectively, and are meant to be the main enemies of the South Zagorian Army, bordering it on the South and West, respectively. 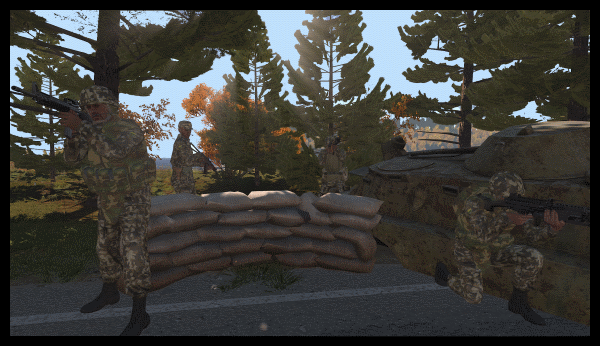 CDF
Soldiers being inspected by an officer. The front two have been modernized already, while the two in the back are still using the old equipment. 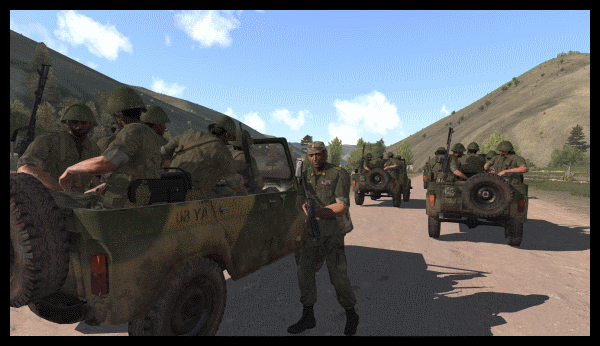 0.2.1: Initial Release
0.2.2:
-Fix for UAZ sounds
-New AK sounds (Thanks to LAxemann!)
0.2.3:
-Officers and Generals added for all countries
-Added two types of belt-holsters and one chest-holster
-Added Makarov
-Added different variants of AK-74sz, including ones with foregrip
-Added Ushankas
-Fixed Berets
-Fixed Backpacks on ground
-Fixed UAZ Tuning (Need feedback)
-UN UAZs now split in vehicle types to CDF and SZ variants
-New recoils for some variants of guns
-South Zagorian RPKs now have the RPK-style stock
-1p78 now has a green reticle (If anyone could help with making it black during day and green during night, it would be awesome!)

0.3.0:
-Mi-24 hind has been added for all countries, in three variants (-v, -vp, -p) and many arnament types!
-All new and existing units are now compatible with Zeus modules!
-Thanks to LAxemann for weapon sounds for the GSh30k and GSh23L
-Added AKMS, AK-74m, AK-74 gold, RPK-74m
-Added Strela-2, Igla, Stinger, goggles, aviator sunglasses
-Added AA infantry, and appropriate groups, to all factions
-Added visor-down pilot helmet (kae_SZ_Helmet_Pilot_down)
-Added transport boxes for all current factions
-Also added one US crate for the Stinger
-Also added RU crates for AK-74m and so forth
-Added CSZ collimator sight (Collamator South Zagoria)
-Added map icons for Hinds and UAZs
-Reverted to old 1p78 reticle


Requirements:
No requirements
A magazine-repacking addon such as Outlawled's is recommended, though

If you know how to fix, or can help with, anything I've marked with a star (*), please let me know.

*PGO-7 Sight for RPG (Need textured model)
RPG-7 could use a bit of tuning
Not all vehicles are present (Need Vodnik, BMP-2, T-72, *T-80u)
Foregrip shows up when weapon is on the ground, even if it isn't a foregrip variant (Arma Bug)
Feet of Mi-24 cargo clip through it
Mi-24 cargo windows are hard to see out of
UAZ-469 Handling is still a bit wonky
Picking up a weapon with a GP-25 from the ground causes the GP-25 itself to become invisible
AI can't aim well with the GP-25

Planned (Long-term, will be a while before these are out):
Spoiler:

Credits:
Bohemia Interactive Studios:
For the great game of ArmA, and for the sample models which have been used for this addon

LAxemann:
For the AK and 30mm cannon sounds, and for help with configuring them